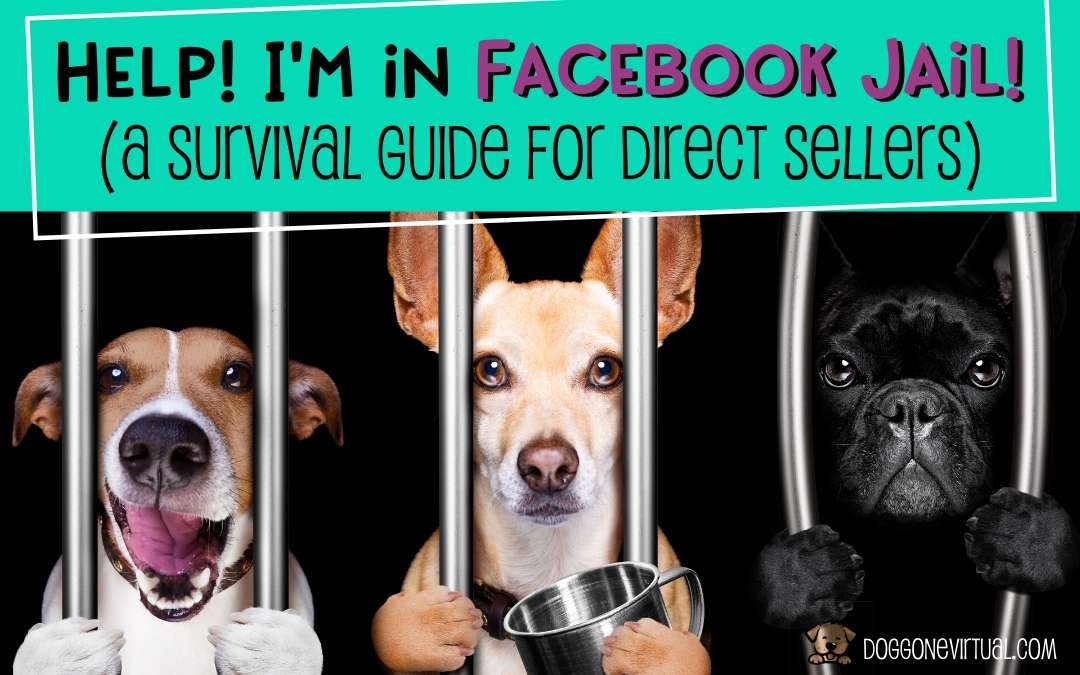 Some of the links in this post are affiliate links. This means if you click on the link and purchase the item, I will receive an affiliate commission at no extra cost to you. All opinions remain my own.

Welp, you did it. You’ve joined the ranks of many other hardened internet misfits and landed yourself in the pokey. It’s a safe bet that Facebook Jail was not on your to-do list for today. So you might be feeling a bit confused, frustrated, and on the edge of a full-blown panic attack.

Not to worry. I gotchu! Having a direct sales business that took place primarily on Facebook, along with a sizable team that was also working their businesses virtually, I’ve landed myself in Facebook Jail more times than I care to recount. Yep, I’m a repeat offender. I’m fairly certain that my picture is plastered up on someone’s office wall. I’m kidding, of course. But there were times when I was pretty convinced that Facebook was out to get me. The one time I was in and out of jail for a solid 6 weeks was definitely one of them.

You might be wondering how in the world you’re supposed to keep your business running with all this Facebook jail nonsense hanging over your head. Let’s walk through what Facebook Jail is and what you can do now.  I’ve also got a free checklist at the bottom of this post with tips on how to avoid it in the future. Let’s dig in!

First, let’s clarify what Facebook Jail is and is not. The best way I can define it is when you have limited ability to do your normal Facebook activities for a specified period of time. The limitations have shown up in random ways like not being able to comment or react to posts. I’ve had times where I couldn’t post in groups, but I could post in events. I’ve also had times where Messenger got shot down, and I had to actually pull out my cell phone to communicate with people. GASP!

You can stay in jail anywhere from a few minutes or hours to days. I think it’s kinda like real jail. It all depends on how bad the offense was and how often you’ve been busted repeating it. And guess what! Facebook doesn’t always tell you how long you’re locked up.

Another thing to keep in mind is that Facebook is a web application and that means it works like your computer. Sometimes it glitches. So don’t panic and assume you’re in jail just because something happens one time and you can go right back to what you were doing 2 minutes later. That was probably just gremlins, and you shouldn’t be too concerned.

If something bigger is happening, like all of your events disappear or you can’t even find the Facebook website, there’s probably an outage. Just hop over to Google and search “Is Facebook Down?”. Lots of websites track these things and you’ll know pretty quick if something much bigger is going on. If it’s down, go ahead and check out. They’ll have it back up as soon as they can.  Since we know what Facebook Jail is, let’s walk through what to do now.

Dude, I know that you were probably running a bunch of parties and you were really depending on them and you just knew this was going to be your best month ever. I get it. Really. But when you panic, your brain stops working correctly and you throw yourself into “Save and Protect Mode.”  All logical reason flies right out the window. You won’t be able to think through what to do next if you’re wound up tight. Just relax. It’s going to be okay. It always is.

This is where having some business besties comes in handy. Reach out to your upline or other Facebook lovin’ friends and ask if they are seeing the same limitations you are. Chances are if they are doing similar activities to you, then you’re going to end up in jail together. Trust me. It’s WAY more fun to be locked up in there when you have friends to keep you company.

I’ve also got that checklist that I mentioned earlier that you can download and keep handy. It will help you identify what the trigger might have been. Make sure you grab that when you’re done reading. 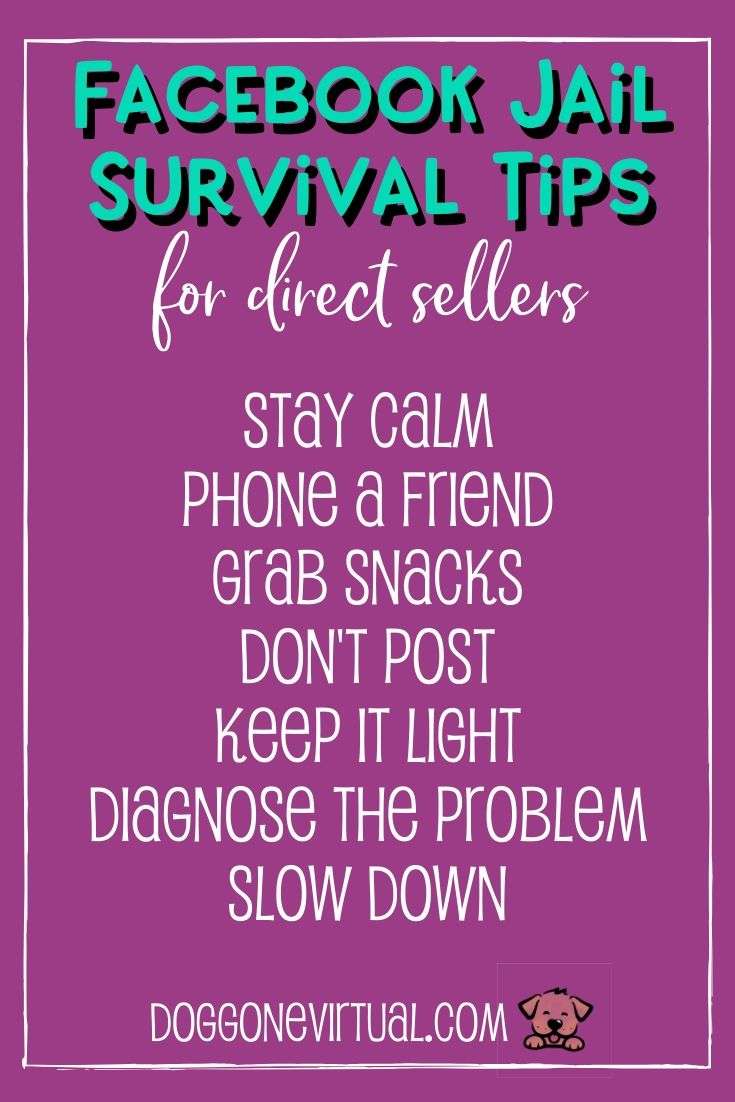 I’m only sort of kidding here. Since we normally don’t know how long a string of Facebook jail lockups are going to last, it’s probably best to plan for the long haul. Make sure you’re well-stocked on your favorite snacks and drinks. Calories don’t count when you’re in Facebook Jail.

Refrain from posting and sharing your frustration

I know it’s super tempting to just let all your frustration out and throw up some mile-long rant about how much you hate Facebook on your team group or even worse, your personal profile. First of all, this is like yelling “FIRE” in a crowded building. You’re going to cause mass hysteria, and there may not be any need. This could be a 24 thing like a stomach bug, and you’ll be back to normal tomorrow. Meanwhile, you sent all of your teammates into a frenzy, and they’re all running around prepping for the apocalypse.

And please, for the love of all the things, do not post rants on your personal profile. It’s just unprofessional and not necessary. Remember, if you’re running your business on Facebook, your personal profile is being seen by all of your current customers and hosts along with your potential customers, hosts, and team members. Probably not your best foot forward, am I right?

I think I’ve made it pretty clear that Facebook Jail happens from time to time, and it’s just part of working your business on this platform. Most people are somewhat aware of its existence even if they only think it’s an urban legend. If you’re running parties, my advice is to keep it light. Again, no rants about how bad it is in your parties. If this iteration of Facebook jail prevents you from posting or interacting in your parties, reach out to your host and communicate with him or her. Reassure them that they will be taken good care of and that you’re going to rock their party anyway.

You can also give your host the reins to the party and let her drive the party for a bit. She might just like it and decide to join your team.  Send her what to post and let her explain to the guests that you might be limited on how and when you can get back to them. Give them alternate ways to reach you in the meantime, like phone or email.

When you’re finally out, keep it on an upbeat note. Grab some jailhouse memes and jokes and share that you’er free! This just shows your guests that you’re serious about working your business even when crazy stuff happens.

Try to figure out how you landed in Facebook Jail

Once you’ve taken care of any pressing issues like parties and reached out to someone else in the biz, it’s time to figure out what triggered it. Brainstorm with your business besties what you were doing when it happened. What were you doing the hours prior to getting shut down? Were you doing anything new and unusual?

Compare notes, because most of the time you can find a similar thread and start to narrow down what Facebook didn’t like. And let me just say, it’s highly unlikely that you will ever figure out the exact reason. It’s just an educated guess. There are way too many variables involved and unfortunately, Facebook doesn’t send you a cease and desist letter before they lock you up. It just happens.

Once you have some ideas about the cause, stop doing whatever it was for a bit.  I know it’s super tempting as soon as you’re out of jail to run back in and “get caught up.” Uhm, big mistake. Slow your roll and get back to normal business cautiously. You don’t want to set it back off again right away. And even if you go slow, it could still happen again. It’s just the nature of the beast.

Create a Plan B

If this is your first time in Facebook Jail, you might be tempted to think that it’s a one and done. But if you’re super active and workin’ your business on Facebook, I can almost guarantee you that it’s going to happen again. I’m not a betting woman, but I would lay money down on this one. I’ve seen it way too many times. So you need to have a plan in place for the next time. Here are some ideas:

Friend, I know Facebook Jail can be crazy frustrating, especially if you’ve been in there more than once. But the thing we need to remember is that Facebook is free to use, and they can change the rules any time they see fit. They are in business to make money and keep users on their platform happy. They change stuff periodically to adapt to the behavior of the users without any notice to the rest of us that are using it to run a business.  Just like that last software update you did on your smart phone.

It doesn’t do us any good to get riled up about it. It’s in our best interest as people who are using Facebook for business to pivot along with them when they change. So instead of getting upset, do your best to figure out what happened and what behavior you need to change to keep the Facebook bots happy.

If you want some tips on avoiding Facebook Jail, make sure you hop over to our Direct Sellers Toolbox and download our free checklist. In fact, I suggest you save it and use it over and over and over again.